THE BEST LIVE ACTS OF TWO THOUSAND AND ELEVEN

Only 81 shows last year. I'm a disgrace to my younger self.

30. I BREAK HORSES- London Cargo
Three shows into their career, and the Swedish shoegazers sound more accomplished than bands with years of experience under their belt. Perhaps they lose their way mid-set with a surfeit of amelodic noodling, but when they hit the mark, they hit it hard. I predict a bright future.

29. THE NATIONAL- Eindhoven Fritz Philips
Half the tracks off “High Violet” may sound like uninspired mash-ups of older, better National songs, but they’re still an force to be reckoned with live. I’ll never tire of hearing “Apartment Story” or watching Matt Berninger clambering over the audience during “Mr November”, and the unplugged sing-along of “Vanderlyle Crybaby Geeks” (with added Owen Pallett) was a memorable closer to the best one-day festival I’ve ever attended.

27. WYE OAK- London Water Rats
Their monicker may give the impression they’re beardy folkie types, but don’t worry; though acoustic guitars do enter the equation, there’s nary an earnestly crooned cliche in sight. Equally as home with scintillating rock-outs as much as subtle atmospherics, Wye Oak are Americana with edge.

26. TU FAWNING- London Hoxton Bar & Kitchen
To quote my TLOBF review: “At heart, their music can be broadly defined as indie-pop underpinned with a gothic aesthetic, but there’s more to them than that. At times, they sound like a vaudeville Menomena; clattering percussion and jagged, staccato guitar lines, married to a manic, brassy energy that’s one part New Orleans marching band, one part Man Man.” So there you go. 25. tUnE-YaRdS- London Scala
To be honest, I think the new band distracts from Merrill Garbus’ idiosyncratic brilliance, but then again, she could have Nickleback backing her and that wouldn’t make that high note at the end of “Powa” any less tremendous. Not as stellar as 2010’s Cargo show, but then again, few things are.

24. PETER BJORN AND JOHN- London Old Blue Last
Jetlagged to buggery, and clearly wanting to be anywhere but a sweaty East London pub, Peter Bjorn and John drew upon their simmering rage to put on a ferocious, punchy set that far eclipsed any previous time I’d seen them. And they didn’t even play That Song. An unexpected treat.

23. ARCADE FIRE- Warsaw Torwar Arena
I’m not the zealous fanboy I used to be, but if I ever tire of “Tunnels” or “Wake Up”, I don’t want to live any more.

22. BRAIDS- London XOYO
The dreadfulness of XOYO ultimately got the better of them, but the first half of Braids’ set verged on divine. If Animal Collective had a female vocalist and weren’t utterly bobbins live, they might sound a bit like this. 20. ST VINCENT- London Queen Elizabeth Hall
Despite a very shaky start, this turned out to be one of the better shows I’ve seen from Annie Clark. To be honest, I’m bound to endorse anyone who runs into the audience, randomly collapses into people’s laps and screaming “MOTHERFUCKER” at the top of her lungs whilst shredding her guitar to buggery, but the rest of the show wasn’t too shabby either.

19. OLAFUR ARNALDS- London Tabernacle
For a country whose population equals that of Leicester, Iceland sure produces more than its fair share of geniuses. Olafur Arnalds isn’t quite in the Bjork/Sigur Ros league (yet), but his cinematic instrumentals rival World’s End Girlfriend in their heart-stirring intensity.

18. MATT & KIM- London Garage
One plays keyboards and talks a bit too much; the other enthusiastically hits things with drumsticks and, to quote her always-flattering bandmate, has “the mouth of a 6 year old sailor and the body of a 12 year old boy”. Unpretentious, hyperactive synth-pop par excellence, guaranteed to make any venue descend into a sweatpit by the third song.

16. BORIS- London ULU
From abrasive, Melt-Banana-esque noise interludes, to Melvins-ish sludge-rock, all the way to disco-infused power-pop, the veteran Japanese rockers combine a tremendous degree of musical versatility with earth-splintering loudness and a massive fuck-off gong. 15. SUUNS- Brussels Botanique
Suuns' whispered vocals don't do that much for me, but their tight Holy Fuck/!!!-esque grooves and punchy Wolf Parade synths make them the best live band to come out of Montreal since Handsome Furs.

14. HANDSOME FURS- London Hoxton Bar & Kitchen
…and on the subject of Handsome Furs, I’m glad to report Dan Boeckner and Alexei Perry remain the most adorable couple in music. As vibrant and energetic as ever, they’re also aided by some stellar new material, including the exhilarating anthemics of “Serve The People.”

13. JENS LEKMAN- London Nettlefold Hall
Trekking over from Gothenburg to play a charity fundraiser for Lambeth Libraries, Jens’ solo set was even more enchanting than his full band show the previous year. His reliance on backing tapes wasn't ideal, but the stripped down arrangements served to focus attention on his impressive vocal talents, and the Sipping On The Sweet Nectar-centric dance party encore was great fun.

12. CONGOTRONICS vs. ROCKERS- London Barbican
A wonderful, groove-laden collaboration between some of the most talented names in western and African music, albeit one very much dominated by the latter. I mean, sure, Greg Saunier’s jazz drumming is always dazzling to behold, but at the end of the day he and his fellow Westerners were simply outclassed by the likembes, car-part percussion and breathtaking vocal harmonies of Konono No 1 and the Kasai All-Stars. They even got the prim and proper audience at the Barbican to get out of their seats and dance, a minor miracle in itself.

11. GIRL TALK- Primavera Festival, Barcelona
Purists would argue mash-up king Greg Gillis isn’t a musician at all, but when it’s 5am, you’re drunk and surrounded by people in a similar state of mind, splicing the greatest hits of the last fifty years with contemporary rap is exactly what you need. 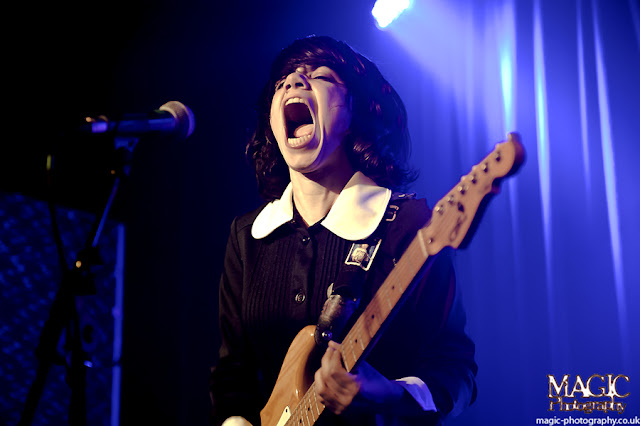 10. SCREAMING FEMALES- London Lexington
Marissa Pasternoster may seem like an unlikely guitar hero with her conservative dress-sense, miniscule stature and unassuming demeanour, but man, she can sure rock the hell out with the best of them. If the Thermals sounded less like Green Day and more like Dinosaur Jr (with hints of Sleater-Kinney and the Yeah Yeah Yeahs), they’d probably sound somewhat like this. 9. YNDI HALDA- London Lexington
Epic, raw instrumentals providing visceral, rafter-shaking thrills without skimping on depth or beauty, Yndi Halda are the band Hope of the States should have been. The best band in Britain right now. 8. I’M FROM BARCELONA- London Tabernacle
They’re still not from Barcelona. There’s still roughly fifteen thousand of them. They’re still one of the most all-out joyous bands out there. 6. PULP- Primavera Festival, Barcelona
I was ten rows from the front when they played Common People. I don’t think I’ve recovered. 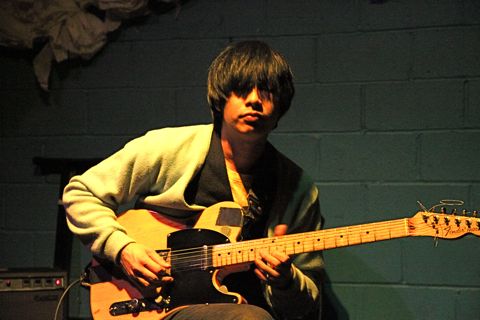 5. DUSTIN WONG- London Lexington
One man, one guitar, 45 minutes of unalloyed delight. Ponytail may be no more, but their kaleidoscopic melodies and tropical-tinged vibrancy remains alive through their guitarist’s breathtaking solo project. I can’t overstate how talented this guy is; if there’s only one act from this list you check out, make it Dustin Wong. 4. EDWARD SHARPE AND THE MAGNETIC ZEROES- London Old Vic Tunnels
Knives are thrown at innocent members of the crowd, gymnasts gyrated on ropes to the strains of “Duelling Banjos”, puppets are dramatically claimed by Death, the sun is worshipped in melodramatic fashion and zombie harlots shuffle around the bar in sinister fashion - and that’s before the show’s even started. Edward Sharpe and his Magnetic Zeros did an amazing job transforming the tunnels under Waterloo Station into a skewed recreation of the Wild West, but ultimately, it’s the music that matters, and they didn’t fail in that respect either. Joyous from start to finish, their unpretentious countrified sing-alongs may lack sophistication, but damn, if you left without a huge grin on your face, you ain’t got no soul. 3. EFTERKLANG- Eindhoven Fritz Philips
If this performance is anything to go by, every band should be accompanied by a 10-piece jazz orchestra by law. The Danish septet’s ethereal beauty was magnified tenfold by the brassier arrangements, and “Modern Drift”, complete with an extended jazz outro performed whilst marching through the audience was one of the best things I’ve ever seen. Glorious. 1. SUFJAN STEVENS- Copenhagen Vega
Sufjan’s most recent full-length offering Age of Adz represented a rather startling departure from his previous work. Gone are the banjos and alt-folk sensibilities of old; replaced by a chaotic, cacophonic odyssey of electronica, vocodered vocals and the subtlety of a bull covered with strobe lights. It’s a glorious, ridiculous mess of an album, demanding a suitably insane live show to do it justice - and luckily, that’s exactly what we got. Extrapolating the grandiose technicolour vision of the new album to every element of the performance, Sufjan’s live set-up gave the Flaming Lips a run for the money for eye-popping extravagance – psychedelic projections, dancers, angel wings, confetti, a surplus of neon face paint and at one point a costume incorporating a spinning mirror ball.

But in contrast to the Lips, there’s no undue reliance of backing tapes. As stunningly immersive as the visuals are, it’s the band that ultimately make the show – from the majestic swell of brass during ‘Seven Swans’ to the intense choral chanting of ‘I Want To Be Well,’ the eleven musicians delivered everything from spectral harmonies to high-energy disco with impeccable skill and vitality. ‘Vesuvius’ was a personal highlight, but there is nary a song in the entire two-and-a-half hour set that sounds less than astounding.

Stupidly, breathtakingly, self-indulgently, sublimely brilliant, Sufjan Stevens raised the bar for what a live show should be.

I saw Efterklang at Green Man. They were different. I can't say that I was won over, but at least they stand out from the rest.

Efterklang is the best band live ever...I felt like a bomb was exploding inside of me.

Hey man, can you give your e-mail? I couldn't find it anywhere in the website.

Sure, it's citizenmeh -at- gmail.com