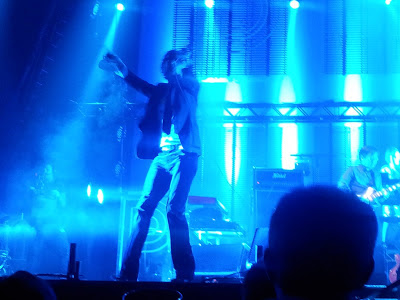 This was Pulp’s first hometown show in over a decade, and goddamn, was it a corker. I mean, a twenty four song, two and a half hour set including Help The Aged (the only favourite of mine I hadn't heard them play before) and quadruple-whammies of Disco 2000->Sorted For E's and Wizz->FEELINGCALLEDLOVE->I Spy AND This Is Hardcore->Sunrise->Bar Italia->Common People – I couldn’t have asked for more, really. Plus, we were also treated to their very first single from 1983, My Lighthouse, with Jarvis' sister Saskia on backing vocals and a fuckload of toilet roll chucked into the crowd (recreating their pre-fame stage antics), and a finale of Something's Changed segueing into White Christmas complete with a proper Flaming Lips-style cascade of white confetti. There’s rumours that after the Coachella cruise they're calling it a day again - that'd be an incredible shame, but at least I've had the opportunity to see them at the top of their game.
Posted by Citizen Meh at 2:48 AM