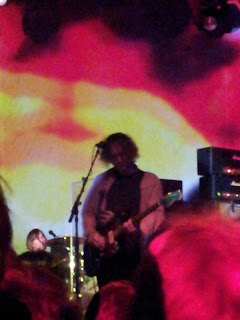 A lot of people complained how terrible the mix at this gig was, and rightly so - even Kevin Shields was visibly frustrated that everything sounded like it was being played down “a three-mile tunnel.” That said, acoustic fidelity has never been the primary draw of an MBV gig, and although the vocals were even harder to discern than usual, they still whipped up the squalls of ear-splitting noise I'd hoped for, not least during a brief, but ferociously intense “You Made Me Realise”.
Posted by Citizen Meh at 7:22 AM