THE BEST LIVE ACTS OF TWO THOUSAND AND TWELVE 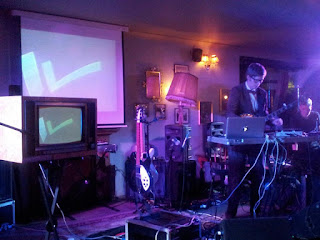 Only 65 shows this year. I blame the Tories.

30. PUBLIC SERVICE BROADCASTING- London Tooting Tram and Social
My friend John has been banging on about Public Service Broadcasting
for a year and a day, but it took me until Christmas to check them out. More fool me, for Mr J. Wilgoose, Esq's eccentric mix of Ratatat/HolyFuck-esque electronica and audio-visual samples derived from the BBC's wartime archives does Her Britannic Majesty very proud.

29. STARS OF THE LID- London St Johns-at-Hackney Church
There's always something special about a winter gig in a church - Amiina at St. Leonards remains one of the most magical moments of my gigging career- and this was no different. Despite the pneumonia-inducing temperature, SOTL’s beautiful classical ambience and psychedelic light projections spirited me to a more serene plane where mundane concerns as frostbite seemed irrelevant.

28. COCOROSIE- London Royal Festival Hall
The sisters Casady may have ditched their trademark moustaches, but
CocoRosie remain one of the most eccentric presences in the hipstersphere. There's no denying they're a bit pretentious, but the contrast between Sierra's angelic soprano and Bianca's soulful rasp sure makes for some magical music.

27. RADICAL FACE- London Lexington
Bon Iver with a sense of humour. Their first UK gig may have been a bit rough around the edges, but it's always nice to see a band so obviously happy to be performing here. Also, their drummer has some mad yo-yo skills. 25. MOONFACE- London Cargo
The demise of Sunset Rubdown may still weigh heavily on my heart, but Spencer Krug's collaboration with former tour-mates Sinaii goes someway to allievating the pain. It's all a bit ponderous, and you can't sing along to it the way one regularly caterwauls to "Random Spirit Lover", but the likes of "Lay Your Head On Down" have a stately brilliance worthy of his previous work.

23. THE APPLES IN STEREO- ATP: Curated By Jeff Mangum Festival, Minehead
Of the many Elephant Six acts brought over for the Jeff Mangum-curated ATP, Apples In Stereo were the most all-out fun. The perfect joy-pop salve for the remains of my post-Boredoms eardrums.

22. THE SUN-RA ARKESTRA- London Barbican
Until this year, I hadn't appreciated how much I needed jazz-playing space wizards in my life. Although Sun-Ra himself has long departed to Saturn, the avant-garde musical collective still preach the message of cosmic goodwill (whilst unleashing killer squalls of saxophone) under
the stewardship of Marshall Allen - still sprightly at the age of 89.

21. KISHI BASHI- London Waiting Room
As attested by the number of times I've seen Owen Pallett and Andrew Bird, I'm a sucker for the ol' violin/loop pedal combo, and Mr K. Ishibashi is a more than worthy new practitioner of the art. The luscious "Manchester" is undoubtely the highlight of his set, but it's moments like the utterly filthy "Just The Tip" that separate him from his more straight-laced peers. 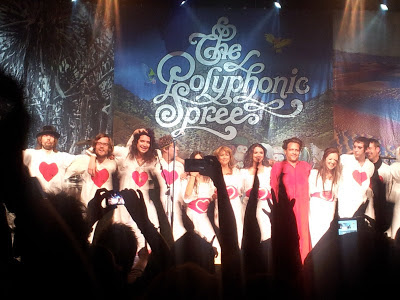 20. THE POLYPHONIC SPREE- London HMV Forum
"Rocky Horror" tribute be damned, it was the second half of this show, showcasing the Spree at their gloriously extravagant best that reinvigorated my love of everyone's favourite musical cult. Shame it took place at the Forum, Destroyer of Gigs, but not even a soundsystem to shame a Nokia 3310 could spoil the joyousness of this greatest-hits set.

19. THE MAGNETIC FIELDS- London Royal Festival Hall
Stephen Merritt remains the grumpiest man in music, The Magnetic Fields remain one of the most dependably excellent band of our times.

18. JOANNA NEWSOM- ATP: Curated By Jeff Mangum Festival, Minehead
Nothing will ever top the Queen of Harps’ Royal Albert Hall show, but nonetheless I can’t deny I had to surreptitiously remove dust from my eyes several times throughout “Sawdust and Diamonds”.

17. ZUN ZUN EGUI- Latitude Festival, Suffolk
One of the few good things to ever come out of Bristol, Zun Zun Egui are pretty much the perfect festival band. Vibrant polyrhythms, killer guitar, gigawatts of energy – they’re basically a more disciplined version of Ponytail, and that’s more than alright by me.

16. DESTROYER- London Village Underground
A friend once described Destroyer's live show as "Bob Dylan covering 'Baker Street' with Simply Red". There's no denying Bejar's music is a bit saxophone-heavy these days, but damn, if Hucknall ever wrote a song as stellar as “Rubies”, I wouldn’t consider him such an atrocity against nature. 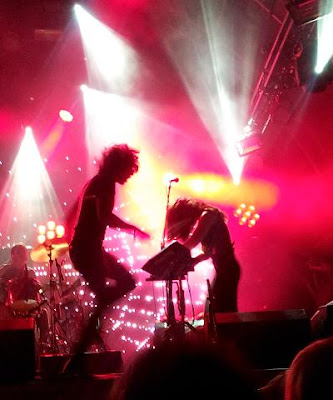 15. M83- London Somerset House
If one were being uncharitable, one could accuse M83's live show of being, for the most part, glorified karaoke. However, I'd be too busy raving the fuck out to "Couleurs" to care.

14. SIGUR ROS- Amsterdam Paradiso
A stripped-down set for sure (no Amiina, no marching bands, no confetti), but Sigur Ros could play in a sewer with only the chattering of rabid mice as accompaniment and "Untitled 8" would still be the most epic musical experience known to man.

13. ST VINCENT- Latitude Festival, Suffolk
When did Annie Clark become such a rock goddess?! And when did her shows stop being frustratingly hit-and-miss and actually reflect what an incredible musician she is?!

12. 65DAYSOFSTATIC- London Garage
"We will not retreat, this band is UNSTOPPABLE!"

11. YNDI HALDA- London Hoxton Hall
Innovation is always nice, but it’s certainly not essential. I mean, Yndi Halda are strict adherents to the Gospel of Post-Rock, rarely veering from its immutable tenets of "quiet, then loud, then quiet again, probably with a bit of snare, then REALLY LOUD" but my God, they do it so well.

10. ELBOW- Latitude Festival, Suffolk
Yeah, yeah, yeah, Elbow are middle-of-the-road indie for closet Coldplay fans, but on a weekend where Bon Iver strikingly failed to connect with the audience, Guy Garvey and co  epitomised what a good festival headliner should be - engaging, crowd-pleasing and featuring a fuckton of fireworks. 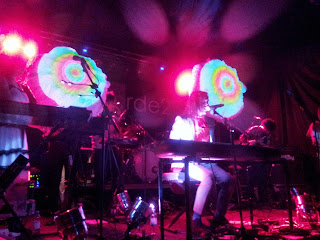 9. OF MONTREAL- Brighton Concorde 2
Of Montreal often have a tendency to let their ever-OTT theatrics overwhelm the rest of their performance, but tonight they got the balance just right. That's not to say they didn't have weird lycra-clad gimps swinging from the ceiling or Kevin Barnes flouncing about with confetti (they did) but they also nailed the musical side of things, with a wonderfully Hissing Fauna-centric setlist and only a limited number of aimless self-indulgent jams. 8. LOS CAMPESINOS!- Latitude Festival, Suffolk
After a brief infatuation with Los Camp in early 2007, I pretty much ignored them for half a decade due to a disappointing debut, a deeply mediocre Scala gig and Gareth David's grating 6th-form obnoxiousness. This proved to be a mistake - although their lyrics are still a bit Adrian Mole, they truly are masters of the catchy synth-pop anthem, and man, I do love me some catchy synth-pop anthems. 7. BOREDOMS- ATP: Curated By Jeff Mangum Festival, Minehead
Many bands like to think themselves as "unique", even as they're peddling the umpteenth hundred riff stolen from the Stooges, but Boredoms are truly one of a kind. Although not quite as life-affirming as their ATP: Matt Groening performance (mostly due to a ten-minute section incorporating the most shrill whistle known to man), the experience of five drummers and FIFTEEN guitarists relentlessly and mercilessly pulverising my eardrums during “Acid Police” will forever remain one of the most breathtaking musical moments ever. 6. LEONARD COHEN- London Wembley Arena
For a man openly touring purely for monetary reasons (his housekeeper scammed him out his life savings), Leonard Cohen sure puts on a bloody fantastic show. Unlike his contemporary Dylan, who is now above such things as "speaking to the audience", "stage presence" or "not viciously pissing on your legacy", the 77-year old is an entertainer of the old school, lending his wit, charm and glorious baritone to a flawless three hour performance - which, due to an balls-up by the promoters, I got to see for free. Hurrah!

5. EFTERKLANG- London Barbican
An intricate, ethereal mass of wonderfulness from start to finish, it’s rather heartwarming that even though Efterklang have gone from 200-capacity venues to selling out the Barbican, they still retain their lovable goofiness. If you watch the above video, I’m actually a few seats down from Casper when he clambers in the audience (although I’m just out of shot). 4. DAN DEACON- London Scala
A Dan Deacon gig in my Top Gigs of the Year list?! Sacre bleu! This was pretty much the same show he’s been peddling for the last five years (except now with the addition of a funky new smartphone app that changes colour in time with the music), but who cares- as long as I live and breathe, I’ll never tire of heading to the mountain of snow, upon the big glen… 3. SOAP & SKIN- London Royal Festival Hall
Anja Plaschg’s brutal, beautiful music is not for everyone, and on the whole this wasn’t her greatest performance (that honour goes to her Union Chapel show in 2010), but for reasons I can’t quite place into words, “Cynthia” hit me harder emotionally than any other song this year. 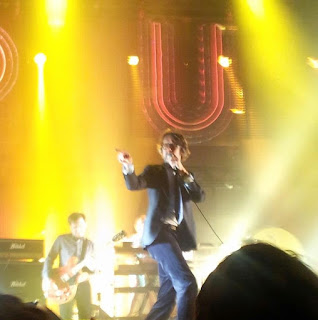 2. PULP- Sheffield Motorpoint Arena
24 songs. Saskia Cocker guesting on “My Lighthouse”, whilst Jarvis threw rolls of toilet paper into the crowd. “Born To Cry” with Richard Hawley. Airings of Help The Aged, Sheffield Sex City, Little Girl With Blue Eyes, and F.E.E.L.I.N.G.C.A.L.L.E.D.L.O.V.E.  A run of This is Hardcore->Sunrise->Bar Italia-> Common People. “Something’s Changed” with a torrent of white confetti, leading to an impromptu singalong of “White Christmas.” Well, what else could I do, but place this at Number Two (of my Top Live Acts of 2012 list)?

Yes, there could have been a bit more brass, yes, the sing-alongs were more muted than I would have liked, but goddamn, I saw Jeff Mangum sing pretty much the entirety of “In The Aeroplane Over The Sea” in London’s most beautiful gig venue. I could go on about the rawness and power of his voice, or the shivers “Oh Comely” sent down my spine, or even the amusing sight of a thousand Guardian-reading halloumi-munchers singing “I LOVE YOU JESUS CH-R-I-IST,” but what really sums it all up was that the standing ovation he received on the second night was perhaps the loudest and most passionate of all the (800+) gigs I’ve been to. Simply incredible.